Half of the historic Capen House rests after its move in Winter Park, Fla., near a statue of Pan at the Albin Polasek Museum and Sculpture Gardens.

By the time I could make it to the shores of Lake Osceola on December 10 to pay my respects, Madame Capen was resting comfortably in her new digs – at least half of her, weighing in at 100 tons.

Earlier in the day, this grand dame of Winter Park homes, age 128, made the journey across Lake Osceola by barge, to rest until a move to a permanent site on the grounds of the Albin Polasek Museum & Sculpture Gardens.

In the late afternoon sun, the house looked right at home amid the bougainvillea and bamboo. Other late arrivals stopped by to snap photos and marvel. A young

mother wheeled three youngsters in a triple-seat stroller so they could see a historic happening. One photographer floated in the lake in a kayak to get a good shot. TV trucks lined the driveway of the Polasek, ready for their 5 p.m. broadcasts.

The man who built the house, James Seymour Capen, helped Winter Park begin. When he later looked back on his family’s arrival in 1884, he could list the people who constituted the community then on one page of stationery.

In the decade after the family’s arrival, Capen raised citrus, helped organize the Orlando-Winter Park Railroad Co. – the beloved Dinky line – was secretary of the venerable Winter Park Land Co., and donated land to Rollins, of which he was a trustee in 1887.

An age-worn photo shows the 1885 house surrounded only by pines, with Lake Osceola in the background. The women wear long, Victorian-era dresses. In a display of youth’s timeless spirit, two boys perch on the porch roof.

It’s remarkable for such a house to have survived from 1885, in our hot, wood-wearing climate and our Florida penchant for ever tearing down and building anew. But the Capen House has  survived, thanks to care over the generations and a remarkable effort in 2013, when it appeared to be doomed. 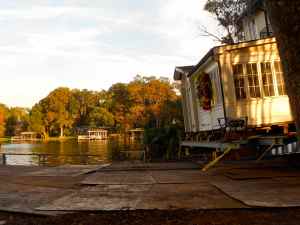 All fans of preservation have much cause to celebrate and cheer the many who are making this a great example of how to save and reuse our historic buildings.

Those of us who missed seeing the house float have another chance, later this month.